Encouraging children to participate in an extracurricular activity is always a good idea! Among the different options, we can find the initiation to Drama. To immerse yourself in this spectacular world, Kidlee offers you 10 mini-games to introduce children to theater and make your own extracurricular activity at home! Turn your afternoons at home into theater classes! Start by playing the director!

Benefits of theater for children:

Drama will help enrich vocabulary. The child will learn to express himself in a more fluid and clearer way. In addition to the development of verbal expression, there is also the non-verbal expression that we will work on. Little by little, the child becomes aware of his or her body and understands that movements and gestures hide another type of communication that he or she will have fun developing.

Theater is a team work, a camaraderie. It conveys great values such as commitment, equality and responsibility. The children will also be brought to collaborate with each other and to encourage each other creating a strong team spirit and reducing shyness.

As with everything, you must be diligent and practice while having fun and learning. Each effort will lead to more knowledge, fluency and experience. The child will then see that his or her efforts make him or her evolve and will have gained in self-esteem !

Creativity and imagination will be developed through the pieces that the child will have fun reproducing, imitations, or simply by improvising and following the fruit of his imagination. It also develops his emotional intelligence. In addition, drama will make him aware of his emotions. This will allow him/her to study, understand and then express them.

In a simplified way, the immersion in theater begins with the work of body expression, then dramatic games and improvisations. And finally, working on a text. Among the different types of theater KidsActivities summarizes in a simple way 9 forms :

A scene is proposed by the director, parent or babysitter, or by the children directly.

Children use only facial expressions and body language to convey a message script. Not a word!

In a dramatic play, you inhabit a different world than the one you live in. In addition, you use your imagination to represent or dramatize something.

In other words, you show others what you want to represent through your actions. In addition to theater, you can also use dance, art, music, sports or any other type of activity.

Children have a special role to play in a play. Thus, after the rehearsal, the play is performed for their parents, baby sitter or other audience.

First, they are given specific parts to play with a formal script and most importantly, they must wear masks. Then, with the masks, the children interpret their role by expressing it only with their voice and body.

Children use puppets to say and do things that they may feel too shy to say or do themselves.

Reader's theater has been developed as an effective way to present literature in dramatic form; it is an interpretive oral reading activity.

Children use their voices, facial expressions and hand gestures to play characters in scripts or stories.

Similar to script reading with the addition of other sound effects; painting the mental image is important.

9. Poetry of the show

While reading/reciting a poem, children are encouraged to act out the story of a poem.

There are two players. "A" is, the follower (mirror) and "B" starts all the action. "A" mirrors all of B's movements and facial expressions.

This exercise encourages inventiveness, clowning and timing - children should be encouraged to be as precise as possible with each movement. When "B" is finished, it's "A's" turn.

This allows participants to overcome their fears and become more relaxed and comfortable with themselves. First, the whole group should stand in a circle, holding hands (if there are more than two children).

Then, one person in the circle starts by turning to the person to his/her right and making a face - this can be an emotional face or a funny face. The next person then shows another facial expression and passes it to the person next to him/her, and so on.

Children need to think ahead about ideas for expression which will develop their anticipation skills. There may also be degrees of intensity in the expression of emotions.

Two children or two groups of children should compete in a tug-of-war. Make sure the "mime rope" does not stretch or shrink. Someone wins and one group loses gracefully. You can designate in advance who should play, the winners and losers and then reverse for the next game!

Go to the other

The leader suggests an imaginary object to pass around in a circle. If the children prefer to agree on an object that makes them all happy! This object, to be passed around, can be a small pea, like a huge balloon, or even an object that stings!

The object is passed from one to the other and the idea is to try to prevent it from falling while indicating its size and weight through action.

The children express themselves only with their bodies, their facial expressions but without speaking! The audience has to guess what is represented.

Impro : what happened next ?

One player is in the middle, the others are sitting on the side. The seated players then assign a task to the player. Then...the latter asks, "What happens next?"

Any player can suggest what should happen next, but the idea is that the group builds a coherent story. The middle player should only do what he or she is told; it is up to the players next to him or her to build the story. At the end of the story, we switch roles!

Ask the child to choose a story that he or she likes. They should then prepare to play a game. If they wish, they can make up the lines. You can also read the story to him as he plays it, like a narrator.

The child will have to introduce himself 3 times and with 3 different tones. For example as a hero, as a witch, or with a sad tone.

A variation of this game can be made with a die that will simplify the choice of tones on the one hand.

On the other hand, the initiation of children to the theater will be more fluid!

Each side of the die reveals a tone to use! Download this free printable die by clicking here.

Funny form of theater for children: the puppet game

With puppets, the children must prepare a small show beforehand.

They will then be able to fully stimulate their imagination and invent characters from scratch! Then, they will present their little production!

You can find puppets on the theme of a wonderful tale to download and print here.

It is possible to use only shadows as puppets! When the imagination is there, the material becomes optional!

This exercise is an exercise in concentration, listening and awakening the senses. With the eyes closed, the child will have to concentrate, trust the guide and learn to be aware of the space.

Children's theater: The battle of the wizards

Each opponent simulates sending an impulse to a specific point on the opponent's body, from a distance and without touching. The other must react according to the force and the intention. You can start very slowly and gradually increase the intensity of the spells.

Note that the debriefing is very important in the theater for each of the children. It will be necessary that each one interprets, and then is a spectator. On the one hand, this will allow for a constructive exchange and on the other hand, the children will learn to observe and give constructive feedback as well as receive and take it into consideration.

The leader of the mini-games, whether he is Family or baby sittermust set an example! On the one hand, by starting with a compliment. Then he should add a remark that will allow the budding actor to perfect his acting. 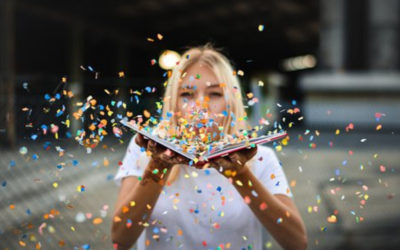 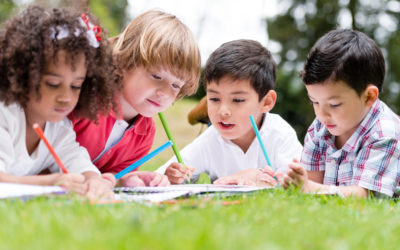 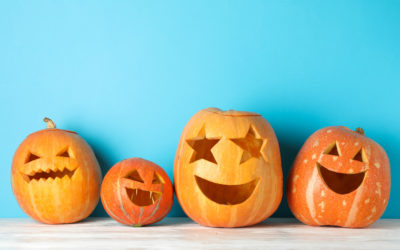 4 easy decorations to make with the kids for Halloween!

In the United States, Halloween is a real institution. The streets are decorated, the costumes are particularly elaborate and each child digs a pumpkin. In France,...