Christmas movie: top 8 to watch before the end of the year!

Little by little, the Christmas spirit is starting to settle in. Lights that bring the city to life, racks of advent calendars and television programming especially for the occasion. At the same time, who doesn't love Christmas movies? A good hot chocolate, a plaid and a good Christmas movie, here is a perfect combo! So, wouldn't it be a good time to get in front of the TV? If you don't know what Christmas movie to watch, Kidlee has made a small selection for you.

The Grinch, played by Jim Carrey, is a bogeyman who obviously hates Christmas and all the joy that goes with it. He therefore prepares a machiavellian plan to spoil the party by stealing Christmas trees, presents and meals from the inhabitants of the neighboring town. But he'll eventually learn that there's more to the magic of Christmas than just that!

Buddy, a human being, has been raised by Santa's elves since his early childhood. When he reaches adulthood, the elves realize that this physical difference is starting to cause some problems: abnormally tall for this legendary place, the man is indeed causing a nice scandal at the North Pole! Sent back to his country of origin, he starts looking for his biological father, a sinister publisher, in New York.

Mommy I missed the plane

The McCallister family has decided to spend Christmas in Paris. But Kate and Peter McCallister realize on the plane that their youngest child, Kevin, 9, is missing. Desperate at first, Kevin quickly takes charge and makes plans to live as well as possible. When two burglars choose his house to commit their misdeeds.

Christmas movies with a twist

The trilogy of a Christmas Prince

In the fictional kingdom of Aldovia, Amber Moore, a journalist, goes undercover as a tutor to Princess Emily under the name of Martha Anderson to get the scoop on Richard, a notorious playboy prince, and so a love affair begins between them.

Christmas movie: Wedding in the snow

Young and bubbly wedding planner, Kelsey organizes the wedding of her cousin Emily, the daughter of her rich Aunt Olivia. If this wedding can propel her career, everything is going to be complicated for Kelsey with the arrival of Emily's ex, Connor, a private detective who has come to investigate Todd, the groom-to-be, and ruin the wedding...

Christmas movies: the ones that will please the children

This work is a must-see for the holiday season. Starring Tom Hanks, the film tells the story of a little boy who decides to go to the North Pole to see if Santa Claus exists. So, to get there, he takes a special train: the Pole Express.

The apprentice Santa and the magic snowflake

This time, it's official: Nicolas is the new Santa Claus. Quite a responsibility for a 7 year old boy! But two days before his first tour, Nicolas has to face a terrible crisis: In the four corners of the world, the magic of Christmas is disappearing, and it is him who is the cause! Because Nicolas has contracted the disease of children who want to grow up too fast: The great-Personelosis! Moreover, the council of former Santas is forced to dismiss him urgently. So, to regain his place and save Christmas, Nicolas will have to rediscover the innocence, freshness and carefree spirit of his childhood. Fortunately, the "Spirit of Christmas" watches over the little boy and places a magical calendar in his path! It is then, for Nicolas, the beginning of a journey full of surprises through the 24 doors of the calendar.

We have here one of the most beautiful films of Tim Burton. It tells the story of Jack, king of pumpkins and Halloween town. The desire to change the holiday wins him, he decides to celebrate Christmas. That's when the mischief starts... 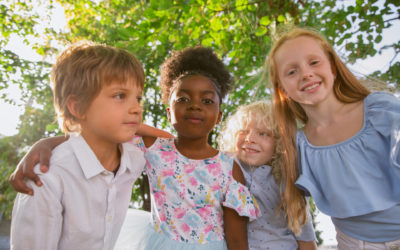 If some time ago, we proposed you some ideas of outings to do with the kids in Boulougne-Billancourt, Puteaux or in Paris. Today, we propose you a top of the list of the...

English activity for babysitters: 5 ideas to introduce children to the basics of English!

It is often said that learning a new language is like having an extra window through which to contemplate the world. At the same time, being bilingual or even trilingual makes life much easier...

Puteaux: top 6 activities to do with the little ones

Looking for inspiration when it comes to outings with the kids or activities to do as a family? Tired of the classic outings? Don't panic, Kidlee comes to your rescue with...